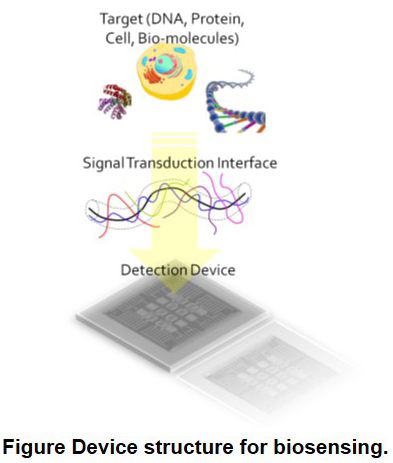 In Sakata laboratory, a principle of semiconductor device based on field effect is introduced as a novel biosensing method, which allows to detect ionic charges for biological phenomena in a direct, label-free, real-time and noninvasive manner, because most of bio-molecules have intrinsic molecular charges such as DNA molecules, and cell-cell communication is closely related to ionic behaviors through ion channel proteins at cell membrane. Of course, various ions and cells flow inside blood vessel. Thus, we think it is very important to measure intrinsic charges of ions and bio-molecules based on biological phenomena to comprehend bio-functions In Vitro or in vivo, and the charged media flow contribute to “circuit” in a human body. On the other hand, electrical “circuit” includes semiconductor element based on flow of electrons. Therefore, the detection of ionic charge flow related to biological phenomena by the flow of electrons using semiconductor devices will produce a direct and simple biosensing technology. We would like to propose the concept as “Integrated Bio-Circuit Sensing Technology”. The platform based on semiconductor principle is suitable for an applicable detection system in the field of clinical diagnosis, pharmaceutical discovery, tissue engineering, environmental investigation and food control.
The device structure for biosensing is composed of three functional elements such as biological target, signal transduction interface and detection device, as shown in Figure. In developing biosensing devices, specific biological target should be designed for application. In this case, such a detection target is found in the field of medicine, biology, pharmaceutical discovery, tissue engineering, clinical diagnosis, food safety and so on. In order to detect biological targets selectively, signal transduction interface should be designed between target and detection device. The functional interfaces are formed between solid and liquid phases, which can be classified as physically structured interface, chemically modified interface and biologically induced interface. Lastly, detection devices should be designed as sensing principles enable to detect mass, viscoelesticity, charges, permittivity, fluorescence and so on. In this chapter, the semiconductor-based biosensing devices are introduced as the detection device, but various kind materials of semiconductor are designed such as silicon, carbon nanotube, graphene, transparent amorphous oxide and so on.

In Vitro cell sensing results in significant information of cell functions conveniently. When artificial cells such as induced pluripotent stem (iPS) cell are transplanted into a body after control of differentiation induction, their functions contribute to regeneration of tissues or organs. In this case, the regenerated cells are required to be safety and show good quality in a body. So, the evaluation of cellular activities are needed to check the quality of living cells before transplantation. On the other hand, the effect of drugs on living cells is being investigated including a side effect in the field of pharmaceutical discovery. In this case, dying cells such as programmed cell death, apoptosis are detected by cell sensing methods. Thus, in vitro cell sensing plays important roles for quality check of transplanted cells or evaluation of degradation of cells based on drug effect in the field of regenerative medicine, clinical diagnosis, drug screening and do on. Here, some case studies of in vitro cell sensing are introduced as follows.

In this study, we have proposed and demonstrated experimentally a novel monitoring device of single mouse embryo activity after in vitro fertilization (IVF) using a semiconductor-based field effect transistor (FET). The FET biosensor realized to detect it noninvasively, quantitatively and continuously by change of hydrogen ions with positive charges, which were induced by dissolved carbon dioxide due to cellular respiration activity during cleavage. The electrical signal of FET biosensor should become an effective indication to evaluate objectively single embryo activity as its morphology is observed subjectively after IVF. The platform based on the FET biosensor will contribute to promote elective single embryo transfer (eSET) in human assisted reproductive technology (ART).

1.2. Real-time monitoring of potassium ion release due to apoptosis with cell-based transparent-gate transistor 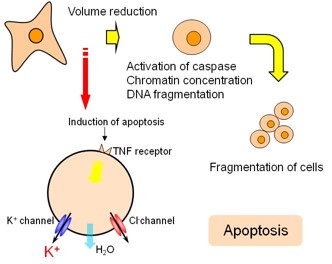 Indium-tin-oxide (ITO) was utilized as a gate material, because cultured cells could be easily observed by microscopy due to its transparency. After induction of apoptosis on the cell-based TGT, the change of threshold voltage decreased gradually, which resulted from potassium ion release caused by apoptosis. The morphological change of apoptotic cells was simultaneously observed by the inverted microscopy. The platform based on the cell-based TGT is suitable for a simultaneous analysis system to realize subjective and objective evaluation of cell activities. 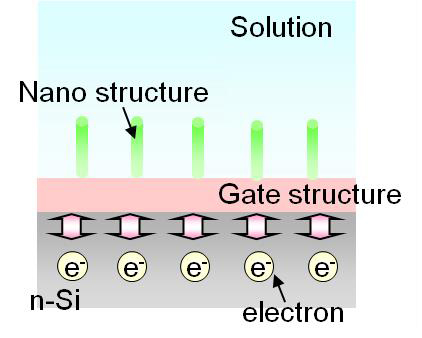 Micro and nano structure on gate electrode of semiconductor devices contribute to increase of surface area for immobilization of probe molecules and amplification of signals. Nano particles or nano pillar can be designed as nano structure, of which gold, silica, and carbon nanotube and so on are utilized. In particular, detection limit of FET devices is closely related to Debye length at the interface between gate surface and solution. When nano pillar structure is made within Debye length, longer or larger bio-molecules such as DNA or protein can be detected within Debye length. In case of DNA sensing, particularly, extended DNA molecules can be detected parallel to gate surface resulting in label-free DNA sequencing based on intrinsic molecular charges.

Cell A is composed as a functional interface cell and induce a signal based on interaction of target cell B to a semiconductor device as if an interface material plays its role. The cultured cell A causes the function of cell B due to cell-cell interaction on the gate sensing surface. Here, vascular endothelial cell and tumor cell correspond to cell A and B, respectively, for example. Thus, we can design in vivo-like gate FET in order to detect and reproduce biological events in vivo such as cell-cell interaction on the gate sensing surface in vitro. The platform based on the biologically induced-gate FET is suitable for in vivo-like sensing in vitro. 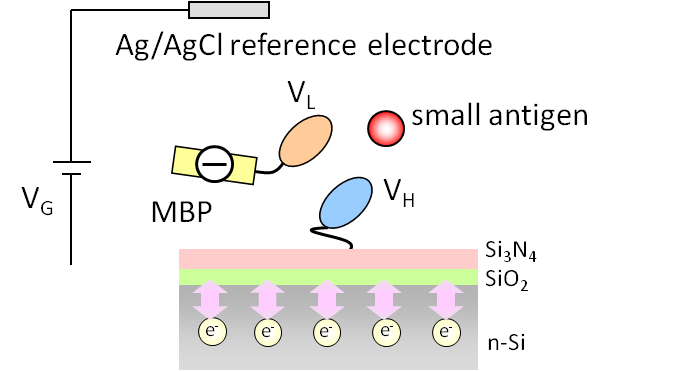 In this study, we proposed a new detection method, open sandwich-based immuno-field effect transistor (OS-FET) for a label-free and highly sensitive detection of low molecular weight antigen. The principle of OS-FET is based on the detection of intrinsic molecular charges caused by the small antigen-dependent interchain interaction of separated VL and VH chains from a single antibody variable region using the field effect. The platform based on the FETs is suitable for a label-free, highly sensitive and quantitative detection system for small antigen analysis in environment, food and clinical researches. 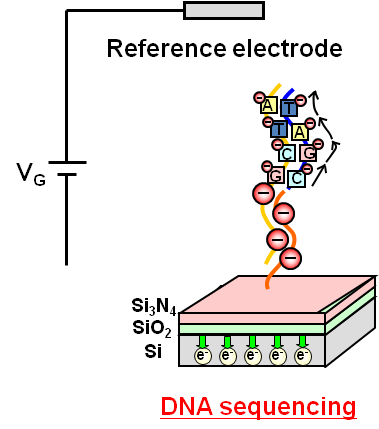 The scheme shows the concept of DNA sequencing based on molecular charges by use of a genetic field-effect transistor (FET). The charge density change caused by one-base extension on the Si3N4/SiO2 gate can be measured as the threshold voltage shift, because the charged molecules on the gate electrostatically interact with electrons in Si through the thin gate insulator.

In this study, we investigated the charge behaviors of ions and water molecules at the oxide device/pseudo-physiological solution interface by use of molecular dynamics (MD) simulations because the detection principle of semiconductor-based biosensors is based on the detection of charge density changes at the oxide sensing surface in physiological environments. In particular, we designed an alpha-quartz (100) surface with some charges corresponding to pH ¼ 5:5 so that the ionic behaviors for 500mM each of Naþ and Cl around the interface were calculated under the surface condition with charges, considering a real system. As a result of the simulation, we defined the region of Debye length from the calculated potential distribution,

in which some parameters such as diffusion coefficient and the vibration of water molecules around the interface differed from those of the bulk solution. The elucidation of the solid/liquid interfacial behaviors by the simulation technique should deepen our understanding of the detection principle of semiconductor-based biosensors and will give guidelines for the design of a bio-interface in the field of biosensing technology, because they cannot be demonstrated experimentally.

In this study, we proposed and demonstrated a novel simultaneous analysis system of biosensing by combining semiconductor-based field effect transistor (FET) with quartz crystal microbalance with dissipation (QCM-D) monitoring system. Using the combined system, the changes of not only mass and viscoelasticity but also electrical charge for interaction of charged dextran molecules with substrate, recognition of glucose with low molecular weight and programmed cell death, apoptosis were simultaneously and quantitatively monitored in a label-free and real-time manner. The combined system will give more detailed information of bio-molecule/substrate interface for development of new bio-material. 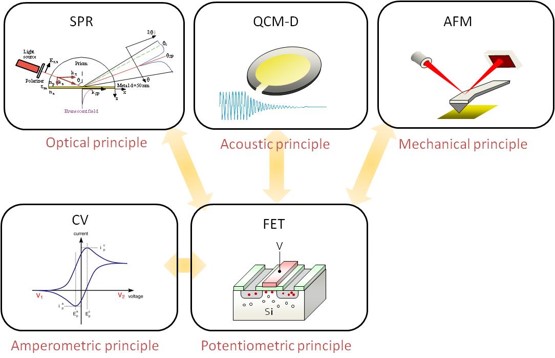 Competition and Cooperation – my leadership style as a researcher
Toshiya Sakata, TEDxUTokyo 2016, 2016/05/29

Department of Materials Engineering, School of Engineering The University of Tokyo